Four thousand years ago, where the Tigris and Euphrates Rivers flowed, civilization was evolving, with the concept of the city -- Ur, to be specific. Temples were established to the many deities in the Sumerian pantheon. One woman, in particular, dared do what none had done before her -- she signed her name to the poems she wrote!  That woman was Enheduanna, a priestess/poet to the goddess Inanna, and her story is told in the eponymous work created by Samara, MDTC's Artistic Director for Dance (who choreographed) and singer/songwriter Gary Kupper (who directed).  Enheduanna (excerpted from Fo(u)r Women -- learn more), premiered in New Jersey in 2015, and makes its New York premiere on November 17, 2018.

To provide a little pre-show "extra credit", Dr. Phyllis "Phaedra" Saretta, Egyptologist and specialist in the art and archaeology of the ancient Near East, graciously shares some of her knowledge on this fascinating woman of the past. 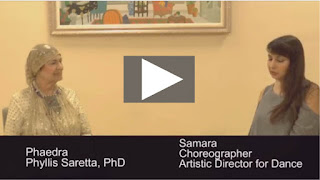 
Posted by Mosaic DTC News at 8:17 AM No comments: