by Samara with Gary Kupper

The dichotomy of being a woman and a dancer in the world of Middle Eastern Dance has  at times been very complex.  Especially today, there is a cultural war within middle eastern society where woman are fighting to emerge from the chains of religious intolerance.
I have always viewed  my career as a dancer to be complete freedom -- it is something I choose to do and I am grateful to be in a free society that allows women the choice to express themselves as they wish. In contrast, the horrible treatment and subjugation of women throughout the world, especially in Middle Eastern society, inspired my partner Gary Kupper and me to create the idea of Fo(u)r Women. We wanted to choose examples of women throughout history from the Greater Middle East who overcame adversity to contribute their gifts to the world.. The women we chose refute the notion held by male-dominated religious doctrine that women should be invisible and only function to serve men.


These Four Women, a poet/priestess (Enheduanna of Ancient Sumer),  a powerful ruler (Hatshepsut of Ancient Egypt), an influential singer (Om Kalthoum of Egypt), and an inspirational activist (Malala Yousafzai of Pakistan), come from different eras in the Greater Middle East and span centuries from 2300 BC to the present day.

The first woman, Enheduanna, lived  in Ancient Mesopotamia (now modern Iraq), was the first non-anonymous author in recorded history.  She wrote devotional poetry to the gods and goddesses of her time. Her writing influenced writers of devotional verse throughout history. She was a princess, daughter of King Sargon the Great who created the first empire in the history of the world.   excavations  in Iraq.  She was made a priestess and founded a temple in the city of Ur which served to consolidate her father’s power in southern Mesopotamia. When a rebellion took place, her temple was destroyed, she was raped and then sent into exile with her followers. She overcame this humiliating defeat and rallied her followers to take back the temple and reestablish her position and prominence. It was only in the last fifty years that her amazing story came to light through the archeological


Next we have a Queen of Ancient Egypt who became a king. Hatshepsut was a female Pharaoh.
A daughter of King Thutmose I, she married her stepbrother Thutmose II  and became a queen. 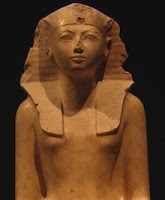 As was the custom, she became a ruler upon her husband’s death, until her stepson Thutmose III would come of age. But instead, going against tradition, she declared herself a Pharaoh and held on to that title well beyond the young king’s adulthood, and lived out her natural days as a great Pharaoh. Hatshepesut was the fifth Pharaoh of the eighteenth dynasty of Egypt and came to the throne in 1478 BC. She is regarded by Egyptologists as one of the most successful pharaohs, reigning longer than any other woman of an indigenous Egyptian dynasty. Hatshepsut promoted trade, opening borders closed by years of war and accomplished many other innovative things during her reign. Her legacy was erased upon her death by her stepson Thutmose III who himself was to become one of Egypt’s greatest Pharaohs. But Hatshepsut had broken the succession of males, and was punished by having her tomb and all her creations destroyed. Her amazing contributions were found by archeologists years later and her story became one of the most enduring stories of a woman of power in history. Or herstory if you will.


We then jump ahead several thousand years to the 1950s in Egypt, to Om Kalthoum, who was one of the greatest singers in the world and one of the most revered women in the Middle East. 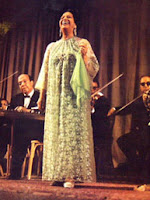 She overcame great obstacles of religious and cultural boundaries to attain world renown as a magnificent singer. Her father, who had a theater, recognized her talents early on. He had to dress her up as a boy to make it acceptable for her to perform. She eventually came into her own and became recognized by the great composers and talent promoters in Egypt at the time. She eventually became so hugely popular that Gamul Nasser, the president of Egypt of the time, would put her on the air prior to his speeches to assure that all of Egypt would listen. She became known as the heart and soul of Middle Eastern society and even influenced western artists like Led Zepplin, Sting, Peter Gabriel, and many others.

The fourth woman we chose, Malala Yousafzai, was born in Mingora,

Pakistan in 1997. This brave young woman was shot in the head and nearly killed in an assassination attempt by a Taliban gunman in 2012 because she and her father were advocates of education for girls. She miraculously survived and went on to become the voice for all girls and women in the world to have the right to education and equality. She is the youngest-ever recipient of the Nobel Peace Prize which she received for her courageous efforts, and continues her work inspiring millions around the world.

By incorporating Middle Eastern and modern dance, original music and the songs of Om Kalthoum and Pakistani Sufi singer Abida Parveen, plus multi-media, photos and video,  we will  show the significant contributions by women to the development of thought and culture in the world.  Fo(u)r Women will make the statement that through their power and the gifts they possess, women can shape and change the world for the better.

(Fo(u)r Women will premiere at Westminster Arts Center in Bloomfield, NJ, on December 12 & 13, 2015.  It is directed by Gary Kupper, choreographed by Samara.  Cast members:  Samara, Morgiana Celeste Varricchio, Nina Brewton, Kendra Dushac, Mary Susan Sinclair-Kuenning, Anika Blodgett, and Dana Irwin.   This program is made possible in part by funds from the New Jersey State Council on the Arts/Department of State, a Partner Agency of the National Endowment for the Arts and administered by the Essex County Division of Cultural and Historic Affairs. )

Posted by Mosaic DTC News at 9:31 AM No comments: