Backyard to Backstage and Back Again

How many times have we heard (or maybe even said), “Let’s put on a show!” It’s one thing to throw a few bedsheets over a clothes line and quite something else to engage in a full load-in at a brick-and mortar professional venue.  MDTC was invited to perform our Beyond the Image Suite in the Jamaica (Queens) Center for Arts and Learning’s Making Moves Dance Festival 2020, and also had to reschedule Linked by Tradition, our concert of Middle Eastern, Flamenco, and Indian dance that was cancelled in March.  So, what could we do when performing arts centers are still in COVID-19 shutdown mode and “the show must go on,” even in a virtual arena, as both of these concerts had become?

Costumes for folkloric dance are as much a character on stage as the performers themselves, so performing the dances in costume was a must.  And, since the costumes are all stored at MDTC “HQ,” it was a given that somehow we all had to perform together.  But where, when, and how?  To answer those questions MDTC got creative, looked at the resources at hand, and found the answer in the driveway at HQ.

A 16x8’ dance platform of marley-over-3/4” plywood could be laid on the asphalt a few feet in front of the garage door.  A much smaller stage that what the dancers are used to, but that was as wide as the driveway would allow.

The garage door opening would be fronted with a rear-projection screen, and the projector would be housed at the back of the garage, providing the needed distance from lens to screen to create the images necessary to the productions.

Tech Director Bob Greenwald arranged for and calculated all necessary details. Performers and technicians consulted calendars, and Saturday, September 5 was chosen as our video day.  We all prayed for good weather.

The weather gods smiled on us.  September 5 arrived as a perfect late-summer day.  Everyone had committed to a 14-day quarantine prior to our getting together.  MDTC dancers, Samara Adell, Morgiana Celeste Varricchio, Kaitlin Hines-Vargas, and Danielle Hartman were “socially distanced” in dressing areas.

Everyone was masked throughout the afternoon's rehearsal, unmasking only to perform for the video.

Lighting Designer Nick Von Hagel, acknowledging that he and his equipment could not complete with the sun, recommended that we begin our video recording after sunset so projections would be bright and visible.  It would also give the marley (very hot under the sun) a chance to cool down.

After an afternoon’s rehearsal and a short supper break, we were ready to go.  Lights! Cameras! Action!

We wrapped up the recording around 10pm. By midnight, all signs that the driveway had been anything but a driveway were gone.  Cinderella’s coach had turned back into a pumpkin, but the glass slipper, full of memories of a whirlwind day and the video (of course!), remained.

Posted by Mosaic DTC News at 7:42 PM No comments:

We are thrilled -- THRILLED --  to announce Mosaic Dance Theater Company's fall season.  To be able to have a fall season during COVID-19 quarantines is a privilege, and we want to share with you everything that's on the calendar.  Of course, everything is virtual, and we are hard at work creating new and relevant programming coming to you throughout the fall months. 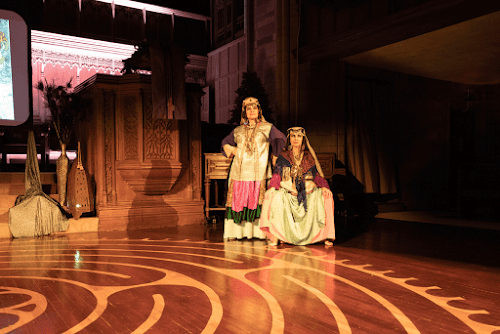 The Making Moves Dance Festival at the Jamaica Center for Arts and Learning is happening this September 25 and 26, and MDTC is happy to be a part of its virtual programming. Faced with myriad challenges brought about by COVID-19, the artists involved are applying their creative processes to present the works chosen by the curators of the festival.  MDTC will present Beyond the Image Suite, an excerpt from our larger production of the same name which premiered in December 2019.  Performers are Samara Adell (choreographer), Morgiana Celeste Varricchio, Kaitlin Hines-Vargas, and Danielle Hartman.The festival will be presented at no charge, but you must register.

Register now so you don't miss it!

Roll Out the Red Carpet 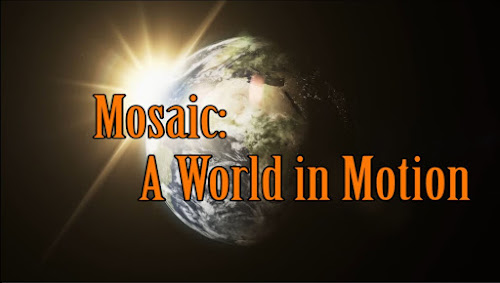 We are all set to premier Mosaic: A World in Motion, a livestreamed video magazine.  Each month is a new program with a different subject, including: in-depth looks at works from our diverse repertory; cabaret nights with "live" performances by MDTC artists and guests; interviews with and performances by Guest Artists; related dance topics.  Co-hosts for World in Motion are Morgiana Celeste Varricchio, Samara Adell, and Adriana Rosa,  Each program will be livestreamed multiple times at no charge, but must register to receive the link. Our first program, "El Zar," will be shown on October 3 & 4, 2020. We are excited to begin.
Reserve your tickets for "El Zar" now. 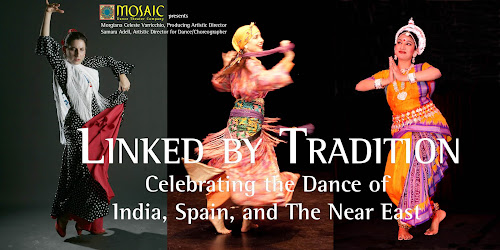 Cancelled on March 12 by the coronavirus shutdown, Linked by Tradition has been rescheduled as a virtual weekend of dance from India, Spain, and The Near East for November 6 through 8.  Friday, November 6 provides master classes for NJ high school dancers, taught by Samara Adell (Middle Eastern dance), Antonia Messina (flamenco), and Rimli Roy (Indian dance). These three master teachers and choreographers return on Saturday, November 7 for community workshops. A concert performance featuring MDTC and our guest artists will be livestreamed on Saturday, November 8. All activities will be presented at no charge. Full details and registration links are coming soon.  Mark your calendars to immerse yourself in these three distinct yet related dance forms.

Linked by Tradition: Celebrating the Dance of India, Spain, and The Near East is made possible in part by funds from the New Jersey State Council on the Arts/Department of State, a Partner Agency of the National Endowment for the Arts and administered by the Essex County Division of Cultural and Historic Affairs.

Posted by Mosaic DTC News at 11:17 AM No comments: